Hi, 2017! You sure are kinda terrible, but thankfully not entirely so. I figured I couldn’t let it go two years before I blogged… though maybe I should just let 2017 fly by… ;)

So I guess I’ve done quite a bit since I watched BvS, haha. I’m just not going to bother talking about it though cause that’s too much effort. =)

So onto recent news, I hit my two year anniversary at Stripe recently! Yay!

I got this sweet tattoo: 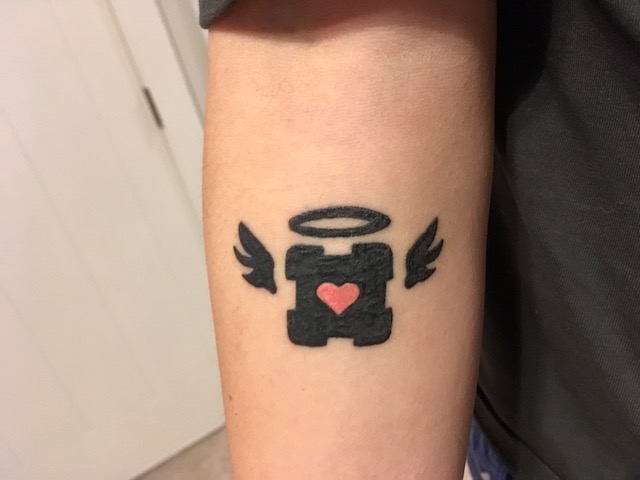 It’s a companion cube from Portal in angel form. The design comes from the Preservation of Mass achievement icon which had the cube and the wings in black & white. I colored the heart in pink and then added the halo. When I showed my artist the design, she immediately said “oh cool! a portal cube!” so that was a good sign. =) I’ve wanted a tattoo for a while but didn’t come up with a design I really liked until recently. My ideal requirements were pink, nerdy and simple. I used to want to get a Kirby which mostly fits those requirements, but I’d be too much of a poser since I haven’t actually played any Kirby games (Smash doesn’t count). I spent some time coming up with more ideas and came up with this! I’m really pleased with the results.

In other news, I also just got back from The International in Seattle. I hadn’t played/watched Dota2 is years, so I was a bit worried I wouldn’t have any idea what was going on, but I actually quite enjoyed the games I watched. My favorite was whenever Earthshaker was chosen and shown on the augmented reality screen, the crowd would clap along with him. It’s so silly, I loved it every time.

Lol, people clapping with the earthshaker