Van and I “just happened” to pass by Andrew’s house at around 5AM in the morning (pictures have the wrong time) and we saw this. Oh no, whatever could have happened?! =) 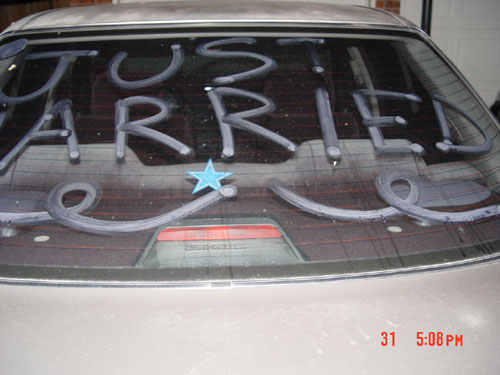 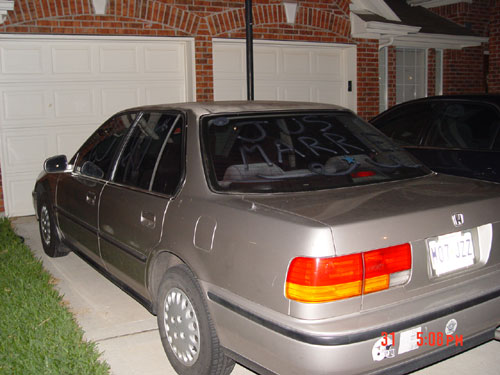 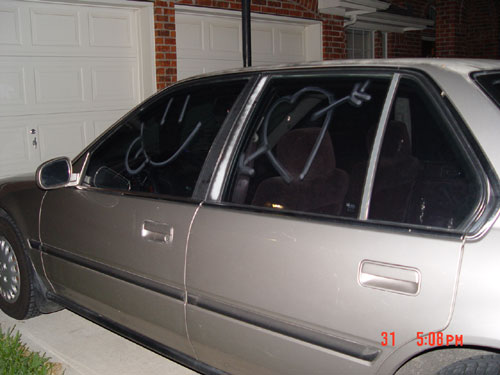 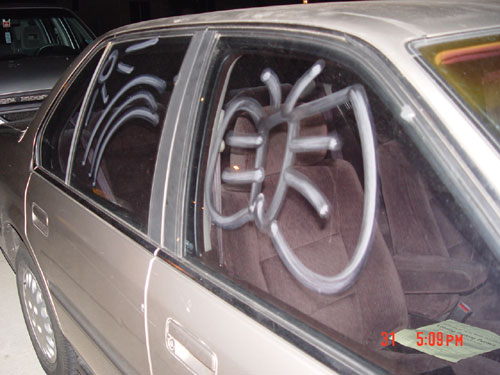 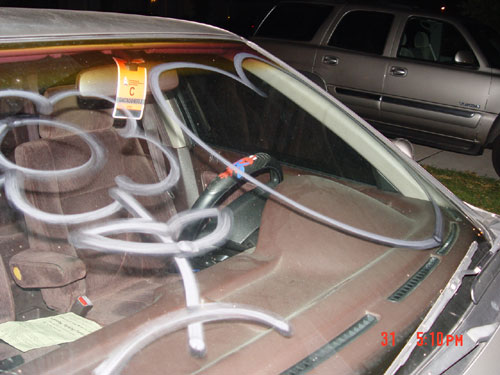 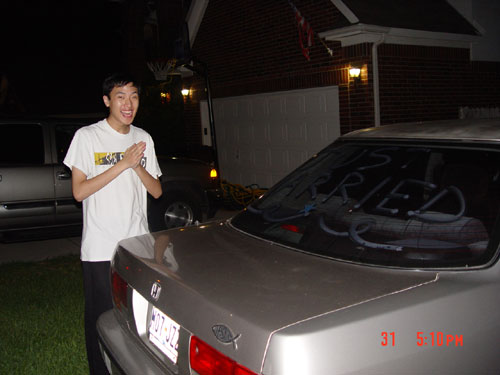 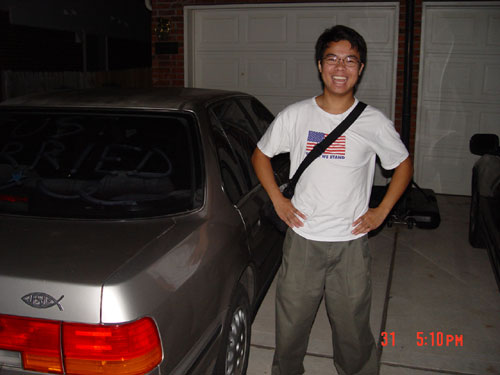 In one fail swoop, the summer wars have begun. A signature sealing their fate was left on my car. I remember last year when we used each other’s cars as the outlet for our carnage. It seems that trend continues and much like last summer, I will up the stakes. My enemies shall fall to their knees before the fortnight of this first attack. I will strike back without warning and leave a wake of destruction. You know who you are and more importantly, I know who you are. So all I can say is beware, beware of the impending retribution.

Sooooooo, I’m actually working on Friends 2004 this year… it’s been a while, I think the last one was in 2001, so a lot has changed, it’s crazy. Anyways, I want to throw in a section that has a question submitted from each of you. Sooooo… think of a question and put it in the comments below. Umm… try to keep it clean and don’t make it a typical “what is your favorite book?” type of thing. =)

I would also like to say that Day After Tomorrow was like Titanic + Independence Day + Twister all rolled into one and not as good as any of them. It even had typical overused/done before scenes such as:

However, there was a bit of good eye candy, and if you don’t take the film seriously at all, it can be a good laugh. I think it would have made a better comedy if they had just taken everything one step further. For example, here are a few things they could have also thrown in that “the gang” came up with:There’s gotta be more things we came up with, but I can’t remember them at the moment. There were also a few good jokes thrown in there every so often. All in all, the movie really was just splices of a bunch of other movies, with blatantly blunt, stupid “in-your-face” attempts at political statements. Feel free to throw in more stuff in the comments. =)

Well, I just got back from getting a free coke at MTWKS, and I stopped to look out the window. I can see a lot of stuff from there, including McNeil, it’s pretty cool. =) If I were Sam, I’d say something like “wow! talk about a good sniper spot!”… but I’m not. ;P

Apparently, Motorola/Freescale’s “abbreviation” for Metrowerks is MTWKS, which is just ridiculous. Hehe… anyways, today at work, I saw two CDs on someone’s desk that turned out to be the two gold CDs of CodeWarrior for embedded PPC linux. Pretty cool stuff, they were shortly picked up and sent out for mass production. It’s really cool to be able to see works in progress and bleeding edge builds of a decently well known commercial product.

They also have an in-house Linux build of CodeWarrior… pretty nifty stuff. Can’t get it anywhere else. =)

I’m going to copy/paste a little bit of an email I sent to Andrew: Oh yeah, Blizzard uses Metrowerks tools in their games, I saw a poster of WarCraft III that just had the WC3 logo on the top, then it was signed by all the developers… I also saw a Prince of Persia 2 poster somewhere…. wonder if I can get my hands on a beta… =) 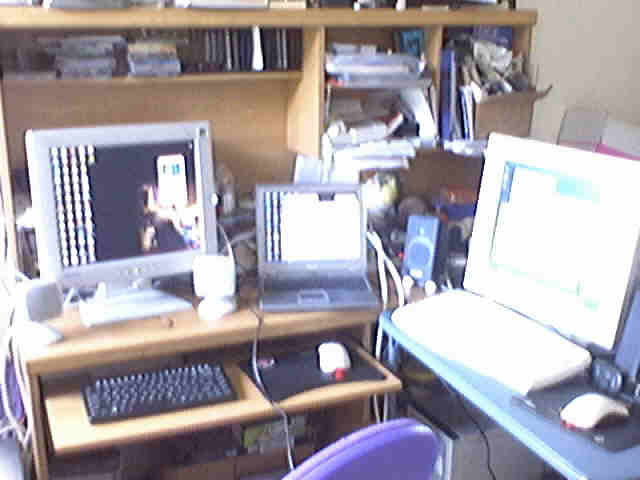 I should have written this yesterday, but as it is apparent (see previous post), I was lazy. =)

Andrew, Mark and I started the day at 6/7AM ramping up to compete in IPSC. I don’t care how nerdy/geeky/weird that makes us, but we all had a pretty fun time I think. Those darn Russians and Chinese middle schoolers. Cheaters! Haha. =)

We managed to get 4 points which put us right around the 50% mark compared to all the other teams. If we had played a bit smarter, I’m pretty sure we could have broken 8 points, putting us at around the top 100 (winning team got 19 out of a max of 24… there were probably around 500 - 600 teams). Oh well, there’s always next year.

I don’t really feel like doing a top whatever list for this past year, but definately major shout-outs go Sam and the little fishies he brought along (that’d be Paul and Nathan =). Definately glad I chose to room with you Sam and getting to you know (corrupting? =) you guys better has been really really cool. Global domination begins behind the Target in August ‘04. lol

A semester is over, GPA went up… ahhhh, I’m so relieved. I have stuff to talk about, but I’ve just become really lazy. Maybe later. =)

After my test is done at 5, Sam and I are going into full scale move out mode. Anyone who has stuff left in our room has until 7PM today to claim it, otherwise we do as we please. =)

WHEEEEEEE!!! No more classes! Now let’s have a bit of fun before finals cram time. =)