Poor OliverWEB has been neglected again. People still need to send me stuff for Friends 2004. =)

Apartment is a blast, I’m (kinda) cooking! I think Chinese is going to be the most brutal class of this semester for me, but hopefully not too brutal. =) My EE prof is insanely boring, but I think I can live with it.

I have 4 invites, who wants them? People who don’t have one get precedence… then if no one asks, I’ll give them to people who already have one+.

I’ve added the first batch of people to Friends 2004… I think this includes Sam, Brook, Nancy, Kathy, and Viraj. The rest of you (if you see yourself on the side) email me and ask for the questions, or get it from your email (if I sent it to you) or whatever. =)

Oh man, LAN party was a blast… thanks Andrew for being a good host. =)

I will try to get pics from Nancy soon…

This blog is dedicated to Andrew, known infamously throughout Sun as the “Java Sucks” intern. For a brief moment, Andrew’s hate for Java trickled throughout the vast internet and was aggregated by blog aggregators (like PlanetSun). 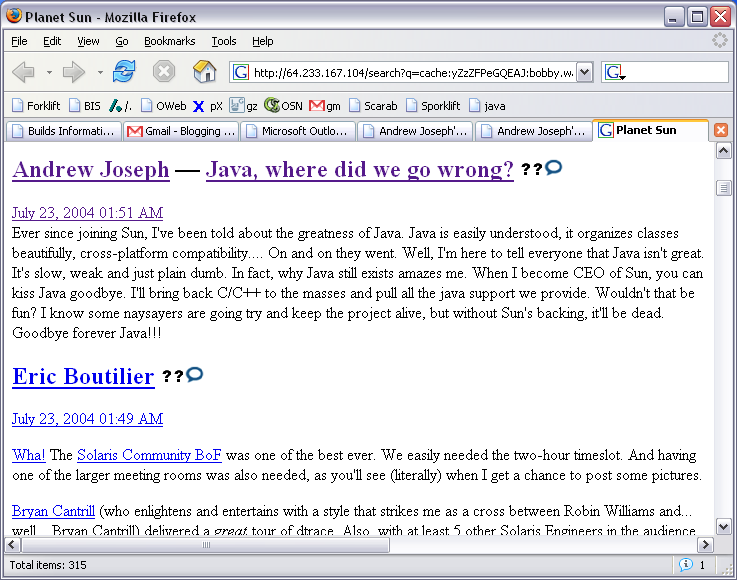 That is, until Sun’s Big Brother caught him and now Andrew is known as Java Joseph.

So, I’ve gotten more used to the CMD+W/CMD+Q thing. Here’s my experience with the browsers:

Good: I like the way the tabs look. Haha.
Bad: Nothing that really stands out… seems to load slightly slower than Safari.

For now, I’ve been using Camino… but I have all three in my dock and I change pretty frequently. =)

Some of OS X’s “just works” stuff is kinda nice. It’s nice that they give you (for the most part) nice defaults that most people would want… however, it freakin’ ticks me off when you can’t change those defaults. For example, when you plug in an external monitor, it automatically extends the desktop. Okay, that’s good. I like that. However, what happens when I don’t want to use the laptop LCD and I just want the PB to use the external monitor (with the laptop LCD open to use keyboard, touchpad)?… that’s right, I can’t do it (without some hacking, at least). So anyways, the best I can do for now is to mirror the display, but then I’m stuck at 1024x768 on the external monitor. Ugh.

Anyone know how to set your own profile in iChat? Yeah, I can’t figure that one out yet.

My CPU temps hit 66.8C today while compiling KDE. I flipped the PB on its side now (bottom of PB is perpendicular to table)… it cooled down to <65C… heh.

I had a big experience of inadequacy when it came to free “native” (as in, not using gFTP or something through X11) FTP clients for OS X. So much so, that I started to look into writing my own. I found that UT gave us Fetch for “free” (w/Bevoware) though, so I’ve played around with that and it seems like it would do the job. Perhaps I’ll write my own eventually anyways though, might be a nice little project to undertake.