This weekend, Blythe and Ryan had their Zelda playing party at my place where they beat the first one. We also watched some Firefly, ate some Indian food, and I watched some 21 (which wasn’t very good, but I watched it anyways). After that, other people showed up at my place and hung out til the wee hours of the night.

Not much else happened other than that… pretty uneventful weekend, I suppose. On to a probably hectic week! Woo!

I’ve had this discussion with a couple friends before, and although perhaps a bit disturbing, it’s a fun thought. The basic premise is “if you’re really old, like 105, and you’re about to die, how would you take yourself out?” I believe Viraj’s answer was he wanted to rent a Lamborghini and drive off a cliff at like 100something MPH. Mine? I want to blow up on top of the Round Rock round rock, taking it out with me. I find it immensely humorous to become infamous by taking out a small town landmark/namesake. Anyways, it’s just a make-believe scenario… please don’t have me arrested. =p

Came home from work today to find Oriana watching Stardust at my place. Mom came and picked her up, but I went ahead and finished watching it. I’ve seen it before, but there’s something about it that makes me enjoy it quite a bit. I think it’s probably something to do with slightly overly chipper girls… they get to me, I suppose. =p Although the downside to that is that I know it’s fake… there’s no such thing as overly chipper girls. =( Haha… ;) How cool would it be to have a girl that could blow up witches by supernovaing though (without blowing themselves up, of course)? 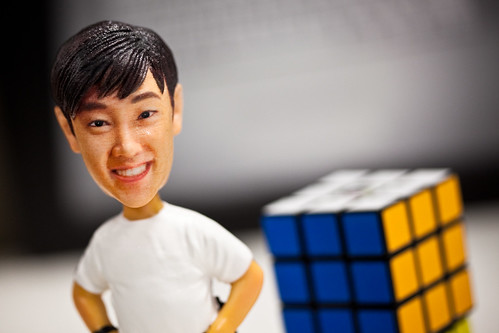 My business development team awarded me this bobblehead. It’s pretty cool, but kind of creepy too. Woo!

I don’t really remember what I did this past weekend, so it’s now known as the forgotten one. Here’s what I think happened…


Oh yes, I remember something eventful now… UT apparently had a pretty large mishap with my [email protected] email address. I sent them an email but have yet to receive a reply, so I will likely give them a call tomorrow. If the call goes unsatisfactory, I’m sure I will supply more detail here.

I did a lot of bumming around and playing WoW this weekend. I started leveling up my gnome rogue on Illidan, Powderpuff, again… went from 55 to 57. Then, I did a few other random WoW stuff. On Saturday, met up with some of the BV folk to wish farewell to Rebecca as she heads off to our UK office, then I went to see District 9 at the South Lamar Drafthouse. I found it pretty enjoyable though I wish the climax would have been a bit more exhilarating.

I stayed up pretty late on Saturday starting the migration of Owiber.com from Dreamhost to a slice at Slicehost. If you’re reading this, all went well. =) I’m waiting for the NS changes to propagate still, but alas, 1and1 is terrible and it takes forever, so I’m transferring away from them. In the mean time, I’ve created A records at Dreamhost to point to my slice’s IP. Next up, OliverWEB and a few other misc sites…

Sunday was a good deal of bumming too, but I biked over to Chancy’s place and had dinner with them and Chad’s family. Now, I am going to drink a coke. Tata!

If this is true, then gnomes will be getting their first healing class and that means we’re going back to the Alliance and <Gnome on Gnome on Gnome> shall live again! Oh how I miss Powderpuff and the desire to be healed by my own kind… sure, lifeblooms and earth shields are great and all, but they won’t compare to the awesomeness of being PW:Shielded by a gnome priest.

This weekend started early after Bazaarvoice’s traditional All-Hands at the Alamo Drafthouse (we’re currently at the South Lamar location because I think that’s the only one that will fit us at this point). Some of the crew headed over to Matt and Tara’s to chill by/in the pool, then we headed to Trudy’s so Heather could get her complimentary birthday martini.

Speaking of the All-Hands, it was kicked off this quarter by an air band competition:

After that, a few peeps came to chill at my place including Ochs and Weishan, which meant that Sam came along too since he apparently has a thing for Weishan and her “innocent friends.” I don’t know, that’s what I heard, just saying.

On Saturday, I headed to Hula-Hut to chill with some BV folk including Lisias who visits us for the first time from the UK. I got some shrimp tacos which I thought were adequately tasty. =) On the way home, Ryan tried to persuade me to play some Zelda games, but was not successful. =p

The night ended with some WoW and DotA, where Viraj decided to not plug in and use his known flakey wireless network resulting in two incomplete games. At least I got to kill and laugh at him a lot in the last game. Some notable moments in the last game included:

On Sunday, I woke up way later than intended and just bummed around for a while. Started going through the Django tutorial again, then chilled with some of the gang and watched The Fly. Thaaaaat’s all folks.

Why is it that ketchup packages are so small, particularly relative to, say, mayonnaise ones? How often to people actually use one package? I just don’t understand…

Now that I’ve complained about ketchup, I have realized I don’t have anything else to talk about, which makes this blog post just a bit pointless. Enjoy.

This weekend started off poorly with my A/C not turning on. It ended up being because the drain pipe was clogged so the system automatically shut off to prevent my house from flooding. At least it was a relatively easy fix. Weekend was rather uneventful other than that… I played around with AppleScript/iTunes/iChat, went to get some dim sum with some of the BV gang, and did some misc errands and cleaned the house a little.

I have a headache right now that I think is due to me needing a new contact prescription (I believe they have gotten worse again - so I am even more blind than before). I’m gonna have to make an appointment tomorrow and take care of that…