Okay, so I returned Friday night, but my schedule’s pretty much back to normal now. For a while over the weekend, even though I seemed to have quickly returned to a normal sleep schedule, I think my eating schedule was still off. I felt like I wanted to eat even though I had already eaten and felt full still. Hungry and full at the same time. It was weird. Anyways, I’m good now.

I’ve used my Kindle pretty heavily and I read three books on my London trip: Ender’s Game, Hunger Games, and The Girl with the Dragon Tattoo. I’m also now about 90% through the first Wheel of Time book. That one starts pretty slow, but it’s finally picking up now.

On Saturday, I was really looking forward to playing ultimate again and it was pretty fun. Last night, we skipped WoW (didn’t have enough people to raid) and played DotA instead, which was also good to get back to. We need to start HoN sometime soon… =) 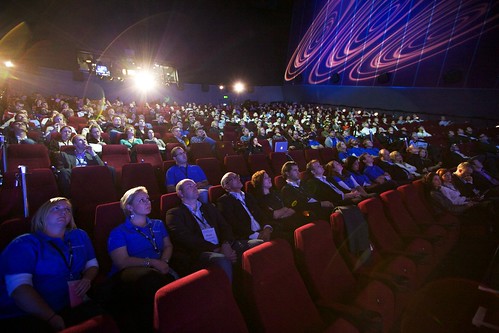 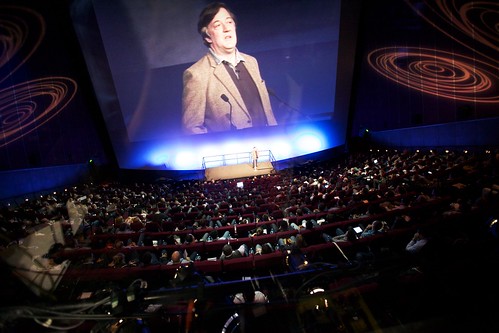 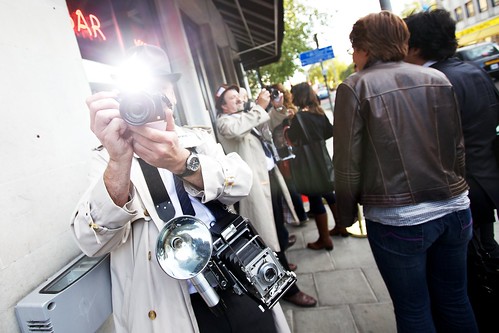 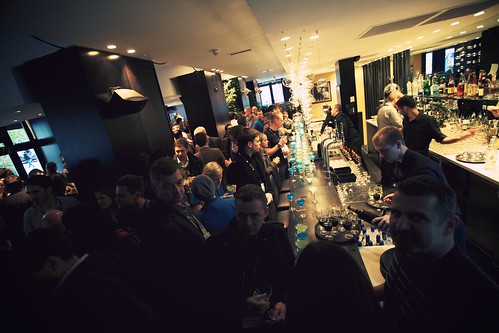 Apparently the US decided to warn against traveling to Europe after I arrived. Oh well. =)

I spent most of the flight reading Ender’s Game, which I enjoyed. I’m liking my Kindle so far! Unfortunately, because I was reading instead of sleeping, I was not prepared at all to stay awake so I crashed once I got to my hotel (morning UK time). I ended up sleeping way too long and woke up at around 11PM. I lounged around a bit until it was early AM when I realized I was pretty hungry, but everything was closed (that I was aware of). I waited until around 5AM and found a McDonald’s. Never been happier to see one.

On the flight over, I sat next to a super cobra pilot who was flying to London to watch the Ryder Cup before going back to Afghanistan. He told me that the GPS, maps, and screen on the iPad are so much better than what’s installed in the cobra, that he carries one along with him (they hack it to hook it up to their GPS antennas on the cobra). Plus, he told me, they can play music and play games with it while they wait around. I thought that was pretty amusing.

I’ve managed to stay out of the rain so far, which I was actually a little surprised about. I had to wander around a handful of stores before I found a grounded/3-prong power converter I could use. I’ve left my camera in the bedroom safe because I didn’t want to risk getting it wet (in hindsight, I wish I’d taken it out since I lucked out not getting rained on), but I went to visit Kensington Gardens and ate at an indian place called Zaika which was well rated on Yelp UK. It was not bad, but pricey. Probably wouldn’t go back.

An Indian man walked up to me as I was walking down a hallway at Heathrow and asked “Heathrow Express?” I wasn’t quite sure what exactly he was asking so I just said “I don’t know.” He then proclaimed “you don’t know anything!” and walked away. Haha, I thought that was a bit harsh.

Well, it’s almost 5AM in London and I’m still up after winding down from “watching” the UT game. Texas shoulda ran the clock down more, but I guess hindsight’s 20/20. I wasn’t able to find any streams of the game, so Andrew kindly rigged up a microphone and we Skyped it up so I could get audio of the game. It actually worked out pretty well, I think.

I went to the Borough Market “today” with some BVers which was pretty cool. I wish my appetite was a bit more alive but it never really is in the “morning.” It was around 1PM, but that’s 8AM in Texas and I don’t think my body’s quite adjusted yet especially since I woke up at 11. =) Regardless, had some tasty bits of food and the atmosphere there was pretty nifty.

I then went to see Quantum of Solace but was sorely disappointed. The action was mediocre at best, there were quite a few slow points in the movie where I found myself just day dreaming about other stuff, the acting was not so hot (particularly from the new comers), and there weren’t even any amusing one-liners (at least none that I found memorable enough). By this point, I hope I’ve talked it down enough for you people who are going to see it just because it’s a Bond movie to get at least some enjoyment out of it, but to me it seemed like a waste of time. I’m honestly very surprised it has a 76% on Rotten Tomatoes UK (not sure if that’s any different than US, but it won’t not redirect me).

If I had to summarize how expensive stuff is in London, I think Krispy Kreme does it well: 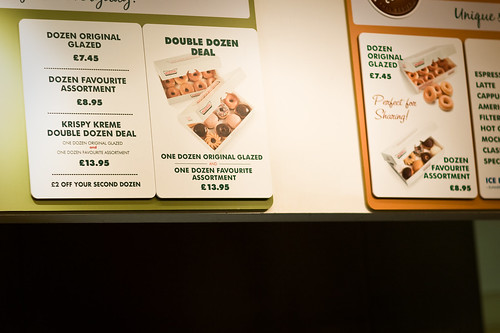 I slept in pretty late today because I was afraid I was coming down with something (I don’t think I am anymore). After I woke up, I browsed around a bit and started to look at maps to figure out where I wanted to go. My battery died soon after that, so I went to plug in to the US->UK power adapter Tiff had, but discovered that it didn’t allow me to plug in my MBP power adapter since it didn’t have a hole for the grounding prong.

So I put on my jacket and venture out into London for the first time without Tiff (not counting my trip to the office from the airport) in search of either an Apple store or some store I could find a generic power adapter that allows for a grounding prong.

Well, after a while of wandering aimlessly I manage to find a store that has one and buy it. I then spend another hour or so trying to find my way back to Tiff’s place because I made note of very poor landmarks. The one that managed to get my back successfully was some upper class lingerie shop…

I hop on the sub, get some food, and arrive at my one major goal for the day (not my photo):

Ahhh… yessss… all is good.

In London, restrooms/bathrooms are called toilets so you ask “where is the toilet?”

Also, elevators are called lifts. I know this because there is a little screen in front of them that has little flags for you to press to change languages. There’s a British flag and an American one and the only difference is “Lift” becomes “Elevator.”

I bought a toothbrush for Oriana because she just learned how to brush her own teeth and will be so happy to have a new one to use. She can’t read yet, so don’t tell her and spoil the surprise!

I’m off to London!