After looking at pictures Kathy took, we had a great sense of deja-vu…

THEN!! We realized we took uncanny similar photos the weekend previously! One of them, we even took a full year+ in advance! SHAME SHAME ON THIS BLATANT THIEVERY!!!

Here is an exhibit of the pictures in question. You decide for yourself who’s guilty.

Your lawyers should be hearing from ours shortly, missy. 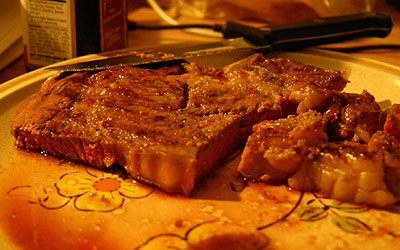 Yesterday, I had a craving for steak. So at around 2AM I went over to HEB and bought a ribeye and a t-bone. Mmmmmmmmm. Up there’s the ribeye and I had the t-bone tonight. MMMMMMMMMMMMMM. Nice medium rareness. =)

Haha, you know your blog is getting severely neglected when Sean tries to post a comment “Please remove this entire site due to lack of content” to your most recent post and Movable Type’s blacklist blocks it due to it being posted on an “old entry.”

Anyways, yesterday the power went out at UT for an hour while Brook, Viraj, Mark and I were watching Lemony Snicket. Poo… so we didn’t get to finish watching it. However, we did wander around DARK CAMPUS for a while and stumbled upon an evil Ben & Jerry machine that was flickering red. Later, we went back to the machine and we have no idea how it had such a red tint (the lights were white and the plastic was yellow =/).

Ummm… Nancy’s probably changing my wallpaper (was Viraj’s face in all its glory) to a more “heterosexual” image as I’m away from my computer in my lab hours. Hmmm… that gives me an idea… I think I’ll upload the Viraj wallpapers to OWeb soon…

Anyone have any Windows XP Home installation CD’s? Not any OEM ones, but plain vanilla Win XP Home CD’s? I don’t need CD key (got it) just don’t know where the CD’s are.

Yeah yeah, I know Pro is better, it’s not for me.