Over the Christmas break, we raided some old photos. My sister snatched a few to digitize in order to make sure some of the crimes done against us were documented.

This one of me, in particular, is a beauty:

There are many more over at livizilla.com. Sometimes, I am honestly surprised I didn’t get physically beaten up. Little did I know that I lived in constant danger… ahhh… ignorance.

On another note, the iMac 27” is too much for Photo Booth to handle. When it turns the screen white as a pseudo-flash, it basically washes out the resulting picture. Luckily, I discovered that holding down shift while taking the photo makes it not do that… but that was after I took this beauty (which somehow isn’t as washed out as other ones I’ve taken):

Hmm, I need a haircut…

Well, TUAW picked up my Photo Booth story, so maybe Apple will fix it now that it’s got a bit more visibility. =) They thanked me by first name reference in their post, though I get no link love. =( Haha, that’s okay, I don’t know if I really want that anyways…

I love between Christmas and New Year’s time at work. It’s kind of like the last few weeks/days of high school where the teachers have run out of things to teach (since the AP tests were over already) so it’s a bit more mellow.

So upon further investigation, it totally seems like there is a Photo Booth bug that started on the 27th of December, 2009. Starting around then, all the files it saves have the year 2010 instead of 2009. This is pretty bizarre. It looks like after 12-27-2009, Photo Booth always thinks it is one year in the future.

Might only impact Snow Leopard… my sister is unable to reproduce, but she’s still running Leopard. Or maybe it’s just my house. Yes, my system time is correct. =p

Well, I succumbed then relatively quickly overcame my cold that left me feeling very… cold. Yesterday, I was talking to Ryan after returning from his visit home when I suddenly felt incredibly cold despite the house being at basically the same temperature it had been the entire day. After a while, I hid under a blanket and still felt cold until I piled another one on top of that. I ended up sleeping in late and skipped work, but now I am feeling much better and much warmer.

On a side note, there seems to be something wrong with Photo Booth. The file names it saves are a year in the future. I checked my system clock and it’s definitely correct… anyone else have this issue?

So let’s see… this weekend we had some more Ultimate Frisbee action… Ryan returned from Cincinnati, Ohio… and… I can’t really think of anything else.

I’ve also decided I am going to end my blog posts, whenever possible, with a webcam shot. Dine thy eyes on the beauty of my face!

Oh, you thought I’d grace you with my whole face, eh? Well, you’ll just have to visit back for more!

I started playing with iMovie a bit this break and quickly threw together two vids:

Christmas at the Wongs:

Oh noes, Amazon knows too much…

Too bad I already have three of those four (well, close)… but the forth is mighty tempting…

I’m feeling mopey all alone at my place… time to listen to some horrible music… =) (and Sam, I am okay… I am not about to kill myself)

So I got bored Sunday and “somehow” managed to finagle myself into getting a 27” iMac. I talked to Ryan about it as I contemplated it after a few hours of surfing around researching it and the conversation quickly went from “what in the world do you need an iMac for?” to “well, you might as well get the big one.” In the middle of our discussion, I called Chad saying “he’d understand.” He did, of course, and also suggested I get the big one. =)

Well, the thing has a pretty big beast of a screen and it’s pretty zippy with its Core i5. It’ll serve me well in photo editing (and hopefully video eventually).

On Saturday, we had our usual Ultimate game, but my leg was cramping the entire time so that made it tricky for me to run. It’s still feeling cramped, so I’m thinking I may have actually pulled it because I don’t think it can cramp for over a day or two…

I’ve gone through and reread the entirety of MrTechHappy.com and found it really amusing. There was a while there where we were really on a roll (even if the jokes were many times inside ones) and I actually really laughed out loud at various times. Those were good times. I’m seriously considering trying to get Mark committed into giving a web comic another go, if only to provide myself entertainment in a few years.

Alright, so here’s my review of Avatar. First, I’ll start by saying my expectations for this movie were high. Really high. I wanted epic. I wanted to be awed and I thought there was a good chance of that. Maybe that’s where I went wrong, but I thought (contrary to what seems like popular opinion on the internet) that it was a good movie. It wasn’t great.

I think the CG was really good and impressive. However, regardless of how good the CG was and how far ahead it was from any other CG flick, we’re (in my opinion) still not at the point where you can quite capture the emotion that a human can convey through pure CG. To me, Avatar was a display of the “uncanny valley“ in respect to emotion. I’ve seen comparisons between Zoe Saldana’s performance in Star Trek vs Avatar and I’d take the emotion she conveyed in the scene with Spock in the elevator over any scene with her in Avatar.

There were two things that ultimately led me to feel disappointed with Avatar. Character development and not quite nailing it when characters were supposed to be emoting. For a movie that was over 2.5 hours long, I would have liked to know and feel the characters more. Death scenes in Avatar? They were okay. Compare them to the death scenes in a Lord of the Rings. LoTR hands down.

Don’t get me wrong, I enjoyed the movie. I thought it was good. But, it wasn’t great and if it ends up “disrupting the movie industry,” I hope it doesn’t send the message that all people want is eye candy. I see movies primarily for a good story and a great one does that by establishing great characters. I think that’s where Avatar fell short and here’s my vote for more money/time spend on characters and story versus eye candy.

I saw Avatar at the Drafthouse. If you can, I would recommend making the most of its eye candy and seeing it in IMAX. I’ll probably try to catch it in IMAX at some point and see how well I enjoy it then. On a “regular size” digital 3D screen, I didn’t feel as immersed as I was led to believe I would. Again, that’s just me. =)

Here are some pictures I took… some of Ally, Chancy’s new puppy! 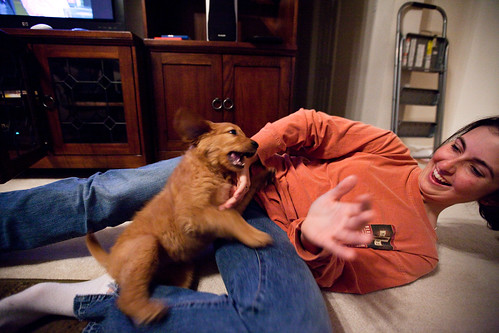 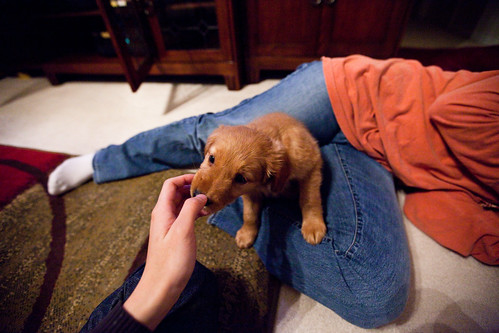 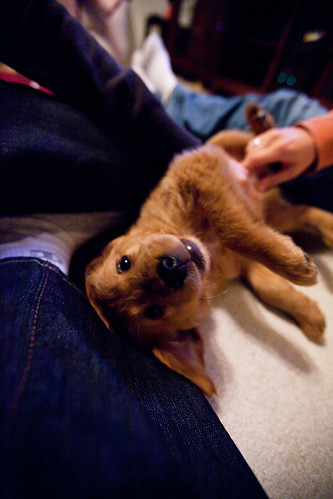 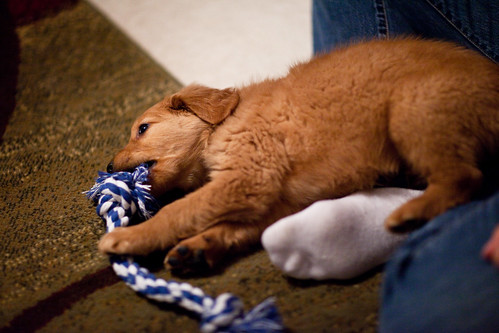 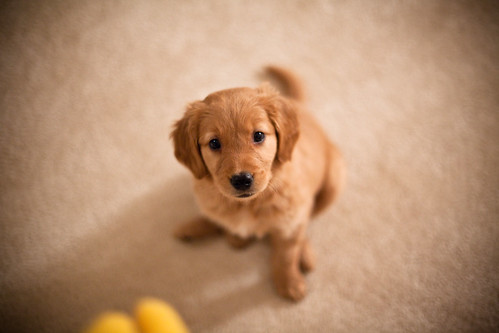 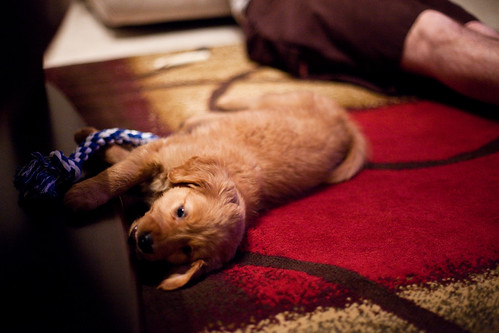 I also brought my snowman to work and he is inhabiting Rebecca’s cube: 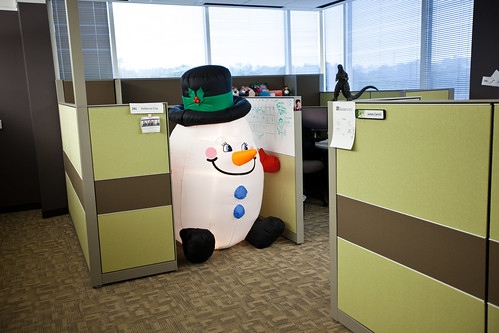 Last, but not least, I got my self-portrait in! He is now above my fireplace. =) 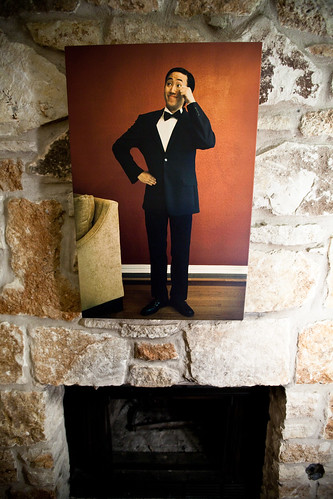 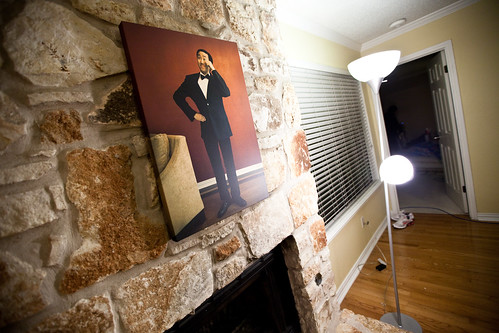