The one thing I’m looking forward to most about moving out into a new apartment is starting anew in respect to furniture. I think everyone at the apartment’s given up keeping it clean (since we’re out in… not that much time), so it’s an utter mess for the time being. Something I am NOT looking forward to is the actual process of moving out. Yuck.

I think I’m going to go for a clean, minimalistic feel to at least my desk area. I’m thinking maybe a clean light wood table top (with metal legs), or something like that. =) My bed… well, we’ll see about that. =) I have a feeling I’m going to be throwing down a decent chunk of money to furnish my new abode… but at least it’s not wasted money, I’ll probably use all that stuff many years down the line…

Never-mind images crashing Safari, this block of code will do it too:

</body>
</html>Accidently found that out today… if you want to test it, go for it. 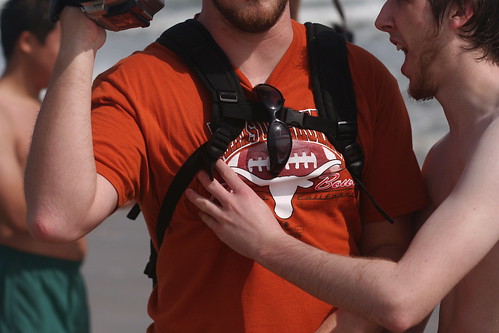 When You See It, Grab It

Ahh, so I’m sitting at the apartment all alone and just chilling to my recent purchase of nearly fifty 80’s songs, haha. Before leaving to run around town earlier today, I paused in silence and looked around the room. This place isn’t very homely, clean, or attractive, but I think I’ll miss it once we all move out in a few months. Despite all of us having different schedules and misc. events in our lives, it was always pretty cool to have the apartment as our central hub where we’d run into each other and just hang out in silence or have random conversations of varying levels of intelligence. =) Good memories here, guys.

This is often how we end Liquid, and at 3AM in the morning what I feel like placing here.

“May all your expectations be frustrated.
May all your plans be thwarted.
May all of your desires be withered into nothingness
that you may experience the powerlessness and poverty of a child
and sing and dance in the love of
God the Father, the Son, and the Spirit.”
-Brennan Manning

People have posted their respective spring break/“yay friends!” posts, so here’s mine. =)

This definitely has been one of, if not the best, spring breaks I’ve ever had (even though I didn’t really have a SB this year - yay PTO! ;). Despite having graduated last year, this coming year has more of the “graduation” feeling to it because many of you all are the ones graduating. I feel like our lives will have a more drastic change after this semester ends and more of us move into the “working world.” Where ever God sends you all in the next few months, I’m happy to call each and every one of you my friends. This was the last SB for a lot of you, thanks for sharing it with me. =)

So I gave in to the iTunes and here’s the result with a CD on the way from Amazon too: 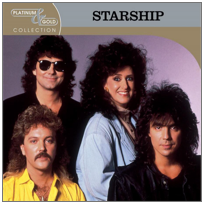 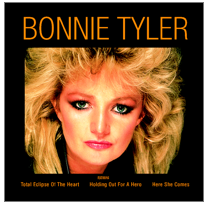 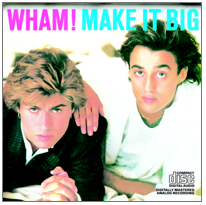 Sometimes I hear a song on the radio and think “man, that’s a good classic.” I really need to start writing down these songs because I want to someday have a massive playlist of crazy awesome fun songs. The only thing is that this is difficult to do well… if I bought each song from iTunes, then I’m locked into the whole iTunes + iPod thing unless I am willing to sacrifice some audio quality to remove the DRM on the songs. The whole iTunes + iPod lock in isn’t so bad currently as I do use iTunes and own and iPod, it just makes me uneasy that in the future, should I want to use something else, I may not be able to. Darn that DRM!

Buying the CD’s containing each song I want to own would be incredibly more expensive and… yeah, I don’t think I’ll go that route.

Back to songs, I think what makes me enjoy a lot of the stuff I hear now is a nostalgic or epic feeling. Kathy and Van believe my taste in music is stuck in the 80’s, and perhaps so, because I find it fun to bounce along to songs I heard in my younger years, I suppose. =) I maintain that this does not mean I will have an 80’s themed wedding, that would be attrocious.

On to another topic, the no-girlfriend-monkey-demon is poking at me again. While I am generally not overly effected by this, his jabs can be annoying at times. I don’t think I feel like I need a girlfriend, nor do I feel like all my attempts would end in failure making me a cynical old man, it’s just that I feel like there are no prospects at all and the hanging around in limbo can be frustrating at times. I suppose it would be similar to many other major events in one’s life, such as finding a college to go to, finding a job, etc. etc. Sitting in uncertainty can be troublesome. I was, thankfully, blessed with not much strife in those two particular examples, so I suppose I don’t have it too bad anyhow. =)

Oh well, next time that monkey comes around, I’m shoving a banana in his butt and feeding him to some kangaroos. =p 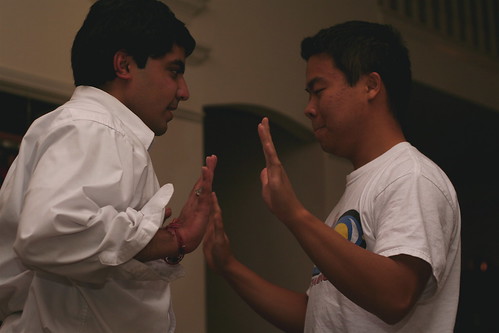 Been a while since we’ve hung out at Mark’s… good memories there, and we added more tonight. Of note were the Trivial Pursuit champions, Andrew, Mark, Van and myself (and my Kevin Mitnick answer… yay animated GIFs!). Also, masked in an attempt to play the above pictured game with her, I very triumphantly slapped Kathy in the face much to my satisfaction. =) Sorry, little one, it’s just so much fun. =p 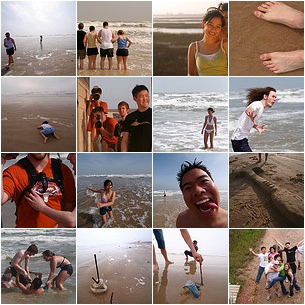