So, some initial comments on the MacBook Pro (I’ve given up being stubborn and calling it the Intel PowerBook)… Besides Safari downloading files and then making them vanish from my desktop, the only software issues I’ve had so far are with iPhoto and it dying on me when I tried to import my 11k+ photos. I may still have issues with iPhoto, but they may be based upon me not being used to the way it does its organization. For now, I prefer the Picasa way of doing things and I’m somewhat frustrated iPhoto didn’t do some simple organization based upon the directory hierarchy I told it to import from. sigh Oh well. I’ll give it a shot for a while and see how it goes.

Hardware wise, keyboard, screen, touchpad (except for the one-buttonness! curse you Stevie!!), and speed are all pretty satisfactory. However, this thing gets pretty hot under use, hotter than I was expecting after coming from a Pentium M Dell laptop which didn’t get nearly this hot unless it was at 100% CPU usage for hours. I guess they made sacrifices to get the thinness… I’m tempted to say I would have preferred a thicker and/or slightly louder laptop to make it cooler, but oh well. I definitely don’t feel sluggish like I did on my old PB 12” so that’s good. I think a decent chunk of the “wow factor” speed boost is lost on me a bit because I haven’t been using OS X for a few months, so I’m not familiar with the response times pre-Intel anymore.

Anyways, I’m looking forward to being able to do some decent photo-editting on my laptop (12” is too small for that - all my previous laptops). Debating about getting Photoshop…

Tried Warcraft 3 (under Rosetta) and it seemed to run okay at 1440x900x32 with all the other graphics settings at their default, but after a minute or two of a game with Mark, I got disconnected. Was a custom map, so I’m not sure if that was the culprit or not… will do more testing later I guess. 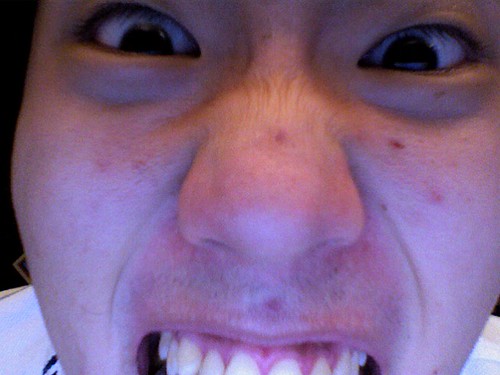 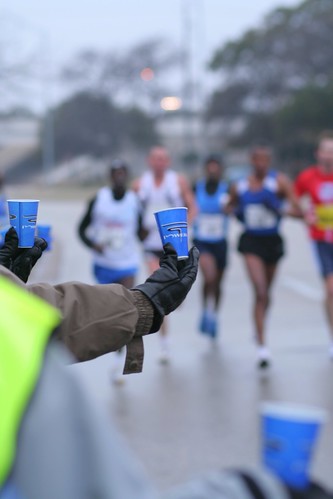 Went to volunteer for the Freescale Marathon earlier today with other Freescalers… man, it was COLD! My hands still feel kinda weird, heh.

We were unprepared for the swarm when it came and like locusts in a field, they sucked up our water reserves like no other. I spent the next hour or so fervently filling up cups as fast as I could. My hands lost feeling so fast, it was crazy. I went into Home Depot and ran my hands under cool water and it felt like boiling water… =)

Anyways, even though it was uber cold, it was still a good experience with the coworkers.

While other people are all being romantic and/or bitter, I’m just going to sit here and say my MacBook Pro Intel PowerBook got upgraded before it even shipped…

On another note, I have been playing Guitar Hero on hard recently, and let me tell you… it’s hard. After listening to the Top Gun Theme a few times, Mark and I have taken it upon ourselves to create a game that allows us to play it with the Guitar Hero guitar. To not allow the Top Gun Theme to be played with the toy guitar with magical colored buttons would be a crime against humanity and everything 80’s. Not sure what time-frame we’re looking at for completion, but the PlayStation2 to USB converter I got from Fry’s seems to not be working, so that’s our roadblock at the time being.

In the mean time, I’ll be playing with the boys… =)

So I finally looked at my server logs and it seems like I’ve got a decent number of people hotlinking my images. Apparently I show up quite high on some Google image searches. I’ve decided to put an end to that and modified my htaccess file to block requests for images other than those from oliverweb.com. shrug

Here’s a graph of how many requests I got for an image of Pikachu: 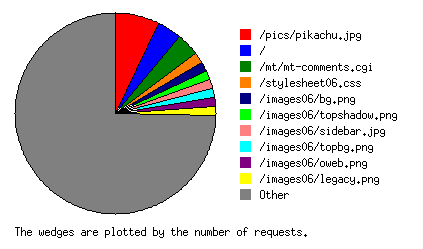 I thought about instead of forbidding access to the picture to replace it with… hmmm… wait, that’s actually a good idea… I’ll get back to you on that. =)

Edit: OMG, this is hilarious!! Go here and scroll down a bit… you’ll know when you see it. =) (You may need to refresh/reload the page once)… some more. Oh… if your firewall is configured to block the HTTP_REFERRER in your browser, it prob won’t work and you’ll just see sad Pikachu… gotta figure out a way around that…