Yeah, I don’t like having this thing on my lap when I’m compiling large projects. lol

I need to find a good graphical FTP client. I tried one out, but I got frustrated with it cause it was screwing stuff up so I just went over to my A64 box and did what I needed there. Fugu is supposedly pretty good, but it only supports SFTP and not regular FTP… at least, that’s what I can gather.

I did this when I first got the PB, but after the reinstall, I forgot and it took me freakin’ forever to figure it out again. In .vimrc, do this to fix delete key:

Where ^? is CTRL+V+DELETE. I wish Apple set their vim defaults to something nice by default like virtually every Linux distro out there.

Oh yeah, if you format the iPod for Windows, you can use it on both Windows and OS X as both an iPod and removable hard drive. Hmmmmm… what else… I haven’t made too much use of Expose yet, so I won’t say much about that yet. The CMD+W, CMD+Q thing still bugs me a little, but I’m slowly getting more used to it.

I’d say my iPod experience has been more enjoyable than my PB experience thus far, but I definately need to get used to some of this stuff (coughFREAKING ONE BUTTONcough). Thank goodness for SideTrack or I would be really really not liking this. Default touchpad speed and acceleration is also a bit slow, Sidetrack fixed that for me too. Right now I have the tap on the touchpad being the right click, which is working okay for me.

I like how Safari opens FTP sites in Finder, but it doesn’t seem to like Gmail very much and waddles through that much slower than Camino or FireFox. I made Camino my default browser for now…

iChat is kinda fruity, so I made it even fruitier… that’s the only way I can use. The bubbles are kinda growing on me, I blame Brook for this one. Terminal is the lame. I very quickly replaced it with iTerm. However, there is a “make delete send backspace” option in Terminal which is nice (this makes the above t_kb thing in .vimrc unnecessary).

Hmmmm, let’s see… what else… oh yeah, Chad, you can turn on the ability to tab through alert buttons and stuff in System Preferences->Keyboard & Mouse->Keyboard Shortcuts->Turn on full keyboard access. I don’t know why this isn’t on by default… oh well, at least it’s there.

I have noticed that the PB doesn’t get very good wireless signal compared to my Dell… I wonder why… couldn’t they just attach the antenna to the all alluminum chassis??

I have had fun making my iChat really really girly. I stole the background from Kathy’s Xanga. =) 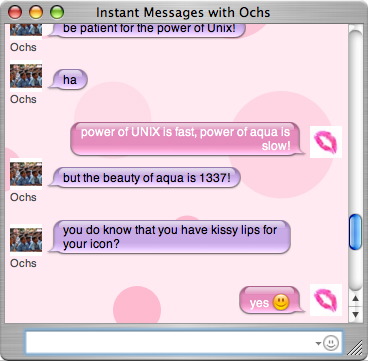 On another note, Ochs’ dad called me a fruit for getting an Apple.

Today, I am going to buy some more RAM for my PB. It is disturbingly slow at the moment swapping like crazy with the slow 4200RPM drive right now. It is almost unbearable, especially compared to my new A64 3200+, the Pentium-M 1.7GHz, and P4 2.8GHz workstation I’ve been used to for the past few weeks. Actually, it is unbearable… but I am getting through it by telling myself that I will be replacing the slow parts soon (hopefully). Soo… I’ll see how much an extra 512MB of RAM will help.

I feel I must blog about my new PowerBook. First, I will give you specs:

Umm… yeah, that’s about all, you can “guess” the rest. I also got me a nice little 20GB iPod (new 4G one), but I have done little with it other than plug it into the wall and place it on top of a laundry bin. lol

*I plan on replacing that hard drive with either a Toshiba 40GB 5400RPM 16MB cache one or a Hitachi Travelstar 40GB 7200RPM one. I’m not quite sure which one to go with as of yet. I could get a 60GB, but I doubt I’m going to be needing all that space (especially with the 20GB from the iPod) so I’d rather save the money. Also, 512MB RAM from Crucial is in order…

As for the “Mac experience”… I don’t really have too much to say as of yet, mostly because I haven’t done that much. VJ is a freakin’ Smallville Nazi and if you even try to blink when you’re “supposed” to be watching Smallville, he will attempt to rip your intestines out through your ribs. Which reminds me, VJ VJ VJ VJ VJ VJ VJ VJ VJ VJ.

So, I’m going to withhold comments on my “Mac experience” until I finish upgrading the little thing, but I will note that I managed to freeze it within a few hours of use and had to hold the power button thingy down to restart it. Booooooo. That’s nothing compared to Andrew locking up a G5 in the Apple store though. What can I say? We’re masters.

So, I’m getting bored. I want something to play with. I think I’m going to sell my Dell to buy a PowerBook. Wheeeeeeeeeeeee…

This is coming from my laptop connected to the internet with my T610 through an IR link. haha… yay for T-Mobile free GPRS!!

Here are the sites I visit multiple times daily:

OSNews - OS’s interest me… we’ll see how I do in the class.

Gizmodo - Happened upon this from reading a Wired article. It’s pretty cool, got lots of nifty gadgets.

Gmail - What can I say? I forwarded all my email to my Gmail account, now it really stinks when it goes down (thankfully, never for long… at least not that I’ve experienced).

Nancy’s Xanga - I basically use Nancy’s Xanga as a bookmark of everyone’s Xanga. So if Nancy ever kills her Subscriptions list or you’re not on her subscription list, too bad. =)

Penny Arcade - They’re only updated a few times weekly, so I only go on update days.

[H]ard|OCP - I used to go here multiple times a day, but I’ve slowly grown out of the modding and hardware frenzy I used to have and have become more interested in software (thus OSNews being one of my favs). Anyways, I still go here and to [H]ard|Forum a few times a week, just not daily.

KDE-Look.org - I’m still looking for a good KDE window decoration that isn’t just a blatant rip of Aqua. I’ve seen a screenshot I’ve really liked, but the punk either just made it in Photoshop or is too selfish to release it. =)

Liquid/Liquid Forum - Yeah… I go here every so often (mostly for forum) but it’s been kinda quiet lately.

So, I wrote an update about the LAN party and our Gospic domination, but I got distracted somehow and I guess I closed the window without submitting it. Doh. Oh well… I don’t feel like writing it down again, so here you go.