Here’s my second run… had Elements to go to so I didn’t do a full run around Town Lake. I decided to push myself on that first mile and I think I did pretty decent, but I was dead afterwards, so ended up walking a decent chunk of it. Probably would have ended up faster if I did do a full run around the lake but kept a decent pace… hehe, oh well. =) I’m gonna try to improve my one mile time.. it’s fun. =)

I officially will be leading an Elements with Sarah Lau now… a little nervous about it, but a little excited too. Ummm, that’s about all I have to say about that for now. We’ll see how it goes. =)

Haha, I just accepted a distance challenge from Van… there’s no way I’m winning this. =p 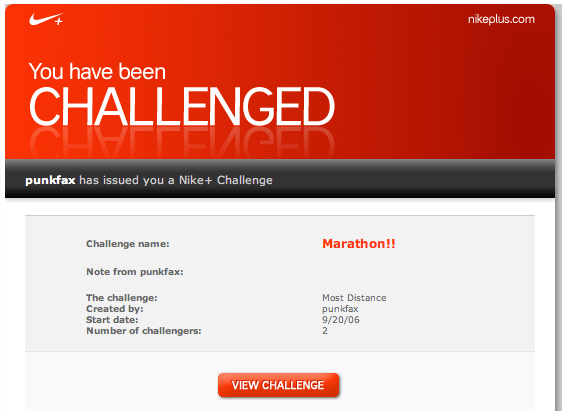 So I messed up the data for my first run with the Nike+ thing. I guess I accidently stopped my workout around the half-way point and started another, so I have two runs recorded instead of just one longer one. Oh well. Haha… now I’m debating if I should try to run the whole loop tomorrow or try to do a fast one mile and take the rest a bit slower… hmmm… =)

I’ve found that if I’m debating about getting a particular song off the iTunes Store, my criteria for getting it has degenerated to “would this be fun(ny) to sing to Viraj in the car if I knew the lyrics?” And often times, even if the song is horrible, the answer is “yes” and I get the song. Hmmm… road trip, anyone? ;)

The following song passed the above criteria.

I was pleasantly surprised to see the FedEx “we missed you” doorknob paper slip this morning with “office” written in the “we left your package at ____” slot. Yay! So before driving out of the complex, I dropped by the office and got my iPod. I grabbed my laptop on the way out as well so I could sync my music with it at work. So now I’m jamming to my tunes on it and it’s pretty nice I suppose. No more lag caused by the hard drive spinning up when going to the next song. =)

I wish I had my camera here to take pictures of the awesome engraving on the back, but that’ll have to wait until after I get back to the apartment. I am looking forward to testing this Nike+ thing later today. =)

One thing is that it is so light and small that it feels a little cheap, especially the wheel portion… mmmmm… oh well, I just look at the back and it makes me happy. ;)

Edit: here are some pictures! =) 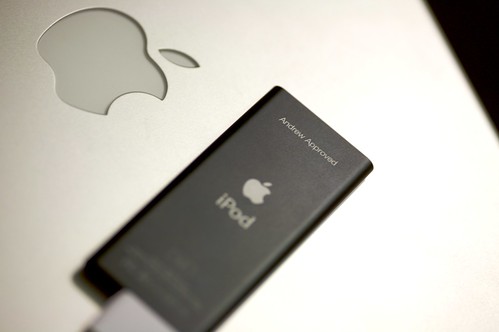 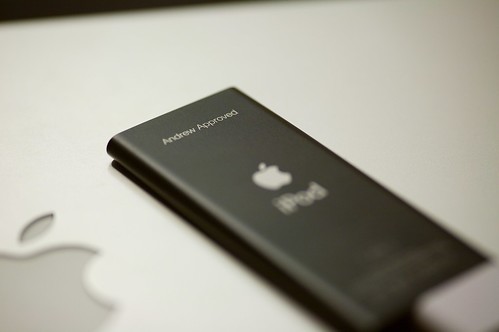 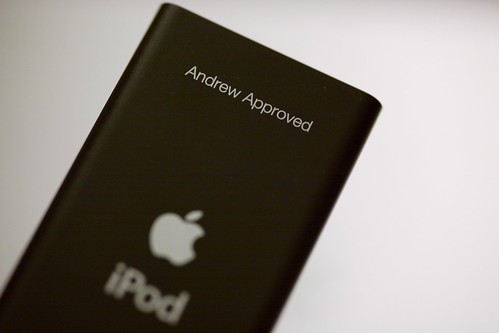 “Baby Beluga in the deep blue sea,
Swim so wild and you swim so free.
Heaven above, and the sea below,
And a little white whale on the go.” - Raffi 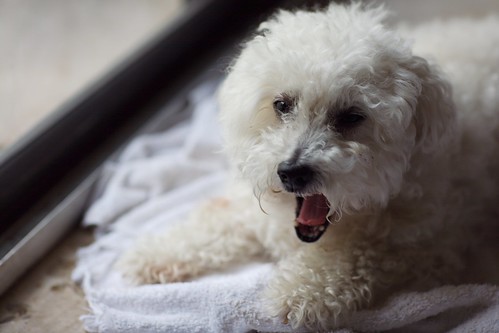 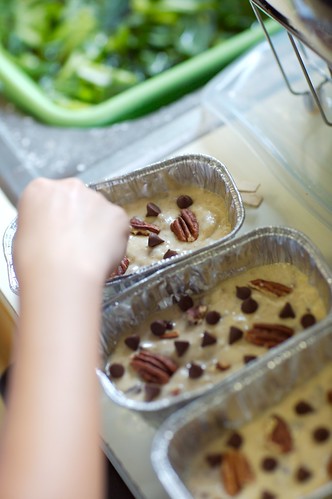 iPod is in Austin, but stuck at the FedEx place because it isn’t “due for delivery” until Monday. Poo. They won’t let me to pick it up either. I hate it when that happens.

Well, I hope I’m allowed to talk about this (I’m thinking yes, since it’s public)… Freescale’s been bought out it seems and is buying all shares for $40. That’s crazy!

“Watch her on the floor tonight
feel the crush she will incite
the spark of hope she will ignite
a beautiful sight
Softer than the lightest snows
watch her as the moment slows
in my face the door will close
and there she goes.” - Five Iron Frenzy

I think I’m on a roll here. Andrew’ll be so proud of me. I think pictures will do: 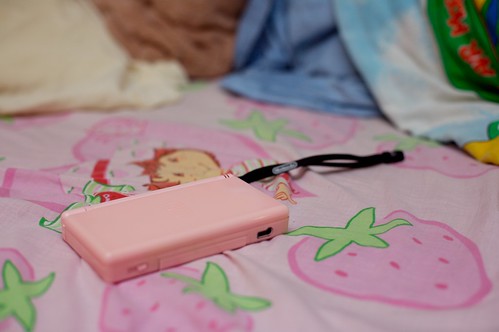 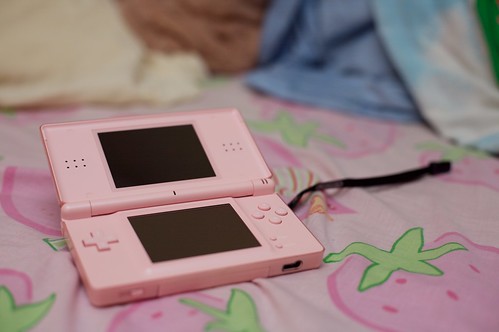 Haha, when I bought it, I got Tetris DS too and the guy said “you sure you don’t want Super Princess Peach?” Then, I went to check out and the guy there said “this isn’t for you, I hope.”

Before picking up the pinkness, Mark and I went to Mangia’s and ate a whole medium deep dish by ourselves. I’m quite stuffed…

“Feel the burn and the fury of my pen
feel the fire, as I fan the flames again
brace yourself for the mediocre
Hail the king of the almost good enough
nothing bold, nothing’s flying off the cuff
things might change, but don’t hold your breath yet” - Roper

I went through my photos in Aperture again (well, mostly just the shoots that had over/nearly 200 photos) to filter out the bad pictures to free up some disk space. I think I deleted a gig or two worth of pictures I would never use. Man, RAWs (especially from the 5D) can be pretty massive, haha.

Posted two pictures from the Florida trip that I didn’t process/upload the first round through: 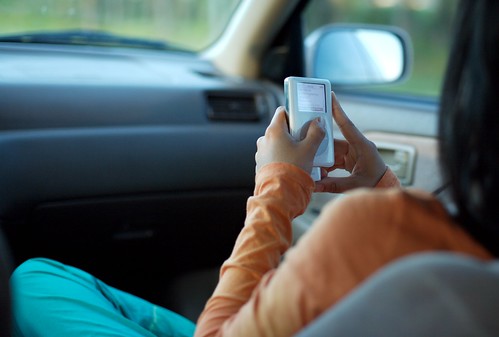 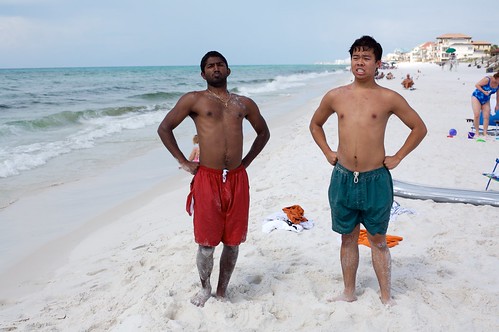 I had this strange dream that made me wake up 15 or so minutes later than I intended on. Apparently, I was supposed to walk down this model runway thing and show off… something… it wasn’t clothes, but something I was holding, I don’t remember what but it seemed like piece of paper. Anyways, I was dreaming I had to use the shower, but I was in this strange house that had a bajillion doors and lots of people all over the place and I was trying to find a place I could shower in private. I found this one shower in the kitchen, but seeing as it was the kitchen, it was pretty exposed. There was one in the laundry room, but full of tons of random stuff, so I went outside to this one cabin looking thing but got stuck trying to figure out how to lock all the doors… it was kinda weird… I woke up around then.

I was really looking forward to running with a new nano and using the Nike+ thing today, but now I gotta wait for the engraving and for it to ship. Oh well, at least my iPod is Andrew Approved, and I can try out my new shoes.

Well, apparently the “available today” means you can order today but that the Apple stores don’t actually have them. Oh wells. I will be ordering my iPod nano online now… so now I need to decide if I want to put an engraving on it and if so, what. I have two lines with 23 characters each. Ideas? Mark and Brook suggested:

But I’m not sure if I really want that…

Edit: it is done:

And I got these shoes: 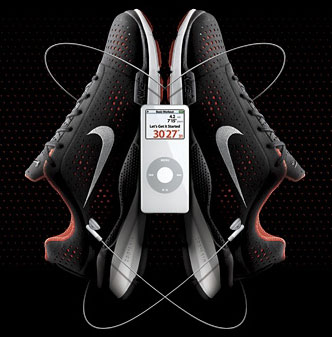