Since 2016, I’ve had the juxtaposition of many aspects of my personal life going rather well, but watching the nation around me succumb to the whims of a maniacal TV host. I will not enumerate the atrocities of the Trump administration or the multitudes of lies and character failings of this self-obsessed psychopath now, but I do want to reflect on these past few years and this election.

2016 and the following years were a wake-up call to me that progress is not guaranteed and the America I thought I knew did not exist. Perhaps most disappointing, I saw the complete failure and hypocrisy of the American Christian culture that I was immersed in through many of my adolescent years. Say what you will about picking the lesser evil in 2016, that’s no excuse to double down on supporting a blatantly evil man as it became increasingly apparent there would be no surprising positive changes in character. The campaigning and businessman Trump was not simply an act.

Regardless of how the election went, we’re barreling into further disaster. COVID infections are back on the exponential growth and this administration has literally given up attempting to contain it. We may very well be past being able to at all. The stock market seemingly isn’t aware we’re in a pandemic killing 9/11s worth of Americans every few days. It along with the economy in general are a ticking time bomb.

This election brings relief. At least we’ll have an Executive willing to govern instead of just shooting for TV ratings, but 2021 will not be instantly rosy or easy either. Biden/Harris is inheriting such an utter mess.

I had hoped 2016 was a fluke and surely Americans would realize their mistake. Perhaps the America I thought I knew was there, but just slipped a bit? I couldn’t fathom how a significant number of Americans could see these last four years and decide that, yes, now I will go out and vote for this man. Trump ultimately obtained record numbers of votes. The Republican party came away virtually unscathed in their complicity. 2016 was not just an accident and election night was heartbreaking in its lack of an immediate repudiation.

I went to DC in 2017 to protest the inauguration and to be on the right side of history. Someone had this poster and it still resonates with me. 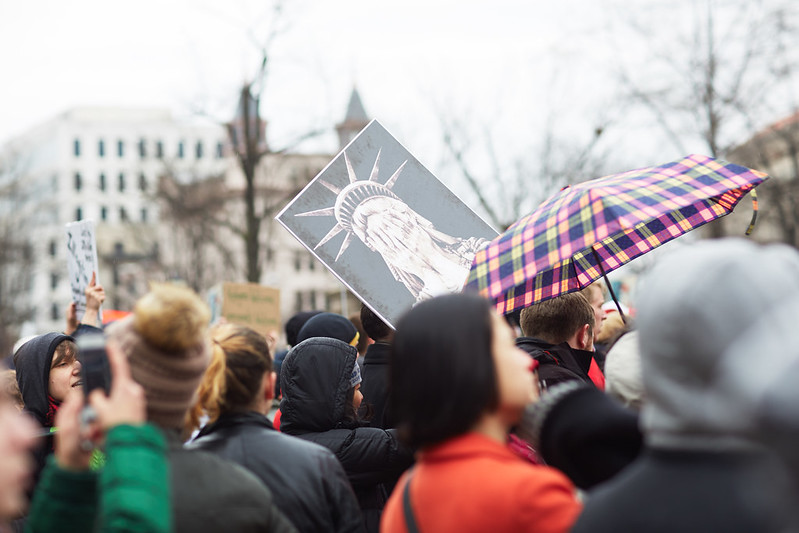 As the disappointment of having to be dragged through a nail-biter of an election due to a broken system fades, I have to acknowledge that millions more Americans voted against Trump than for. There are incredibly heroic efforts of many Americans to resist this heinous administration resulting in dramatic shifts in states like Georgia. Despite the failures and ineptitudes of the Democratic party, we beat the fucker and come January, he’ll be leaving the White House like it or not. We’ve got our FIRST WOMAN VP! First black VP! First Asian VP! There is hope to be had here.

I’ve realized that the America I thought I knew was a fantasy. But, there are still inspirational heroes here and many of them already knew my America wasn’t reality and fought to make her better anyways. If they haven’t given up, my privileged ass certainly has no excuse to either.